Thank you. We have received your inquiry and will respond to your request shortly.

We look forward to the opportunity to meet your individualized material handling needs.

Apply Now
Join our team, fill out the form below. 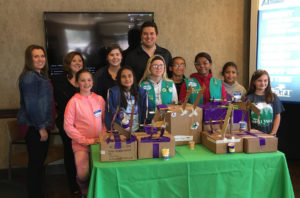 On October 14th, the Girl Scouts in the Heart of Pennsylvania visited Acco’s York plant for a Lift & Learn Workshop. The goal of the event was for the participants to explore simple and compound machines and to design, build and test their crane and hoist creations. By completing the 4-hour workshop, the girls earned the coveted crane badge.

What is the significance of girl scout badges? “Girl Scout awards and badges are a great way for a girl to explore her interests and learn new skills – and to remember every adventure and show the world what she’s accomplished” (GirlScouts.org).

The day at Acco began for the girls at 9am, where they were greeted by Program Coordinators, Colleen Park and Liz Bleacher and Program Director, Allison Meckley of Girl Scouts in the Heart of Pennsylvania. The girls were then introduced to Acco with a short presentation, given by CFO and Vice President of Human Resources, Dave Eshelman. The girls were able to ask questions about our product offerings, business structure and were provided details on possible future internships offered by Acco. “We heard from many of the parents that they had no idea a company like Acco existed and enjoyed being able to learn about it right along with their girls”, said Colleen Park, Program Coordinator for Girl Scouts.

The group was then led, by Alan Stokker (VP of Operations) through the manufacturing plant where they were able to see first-hand what we produce right here in their home town. We started in the shipping department where many of the girls were eager and excited to operate a functioning hoist. According to Park, “It was obvious to myself and co-workers that the girls were having a blast during the plant tour. Many of them took pictures and said they couldn’t wait to tell the girls in their troop what they did”! Seeing the end product allowed them to understand what, in fact, we are manufacturing.

From there, the group of girls had a chance to see the different stages of production throughout the plant, including welding, electrical assembly, machining, load testing and painting. It was wonderful to see the operations through young eyes and to see how fascinated the girls were with the plant as a whole.

After the tour, the girls had a chance to listen to a few key players in the organization. The discussion panel consisted of Dave Eshelman (CFO & VP of Human Resources), Dave Winegarden (Electrical Engineer), Aaron Frentz (Sales Engineer), Alan Stokker (VP of Operations) and Lauren Daniels (Marketing Manager). The question and answer session gave the participants an opportunity to inquire about the various positions at Acco, future career goals and seek recommendations regarding education needed to excel in the manufacturing industry. Park stated that, “[listening to Acco employees gave the girls] a chance to explore new ideas and opportunities that they might not have realized they had. Who knows, maybe in 5+ years, one of these girls will be working as an engineer or welder”!

After a delicious pizza lunch, followed by dessert, the girls were given brief instructions on building a functioning crane and were provided with supplies, including:  cardboard boxes, tape, string, scissors, paper clips, Dixie cups and marbles. With a little over an hour of their time, each girl/group had the opportunity to build their very own simple machine! The results were astounding! With some guidance by troop leaders, the girls scout staff and some members from our Acco team, the designs were all fully operational and truly unique! At the end of the day, we had a group of girls who were experts at simple and compound machines and were able to understand and identify material handling solutions in their environment.

A huge thank you to the Girl Scouts in the Heart of Pennsylvania for approaching us with this awesome idea and arranging for the group of girls to participate! The Acco team had an awesome time touring and speaking to the participants and look forward to holding more events for the girl scout community in the future. We’d also like to directly thank Colleen, Allison and Liz for their kind words towards Acco and for being great partners in our first-ever Lift & Learn Workshop with Acco.

“Working with the Acco team was an amazing experience from start to finish. They were accommodating with our needs and made sure the girls enjoyed a day filled with knowledge and fun” – Colleen Park, Allison Meckley & Liz Bleacher